Each year the recital participants are chosen by the applied faculty in their respective areas as the most outstanding based on their fall juries.  The School of Creative and Performing Arts presented the first “Honors Recital” in 1998.

In 2002, the recital was re-named in honor of Jim McCutcheon, a retired band teacher, who was active in instrument repair at NSU.

Because Mr. McCutcheon wanted to do something to recognize outstanding student performance at NSU, he began offering a financial prize to those students selected to perform on the recital.

After his death, his wife, Mrs. Jo Lapeyrouse, chose to continue this tradition and has funded a scholarship in his name.

“Is Not His Word Like a Fire” from Elijah ... Felix Mendelssohn (1809-1847)
Michael Martin, baritone
Michael Rorex, piano
Student of Mr. Michael Rorex 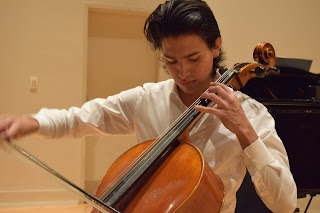 Alejandro Restrepo is a native of Cartagena, Colombia. He is currently pursuing a double major at Northwestern State University in Business Administration and Violoncello Performance. Alejandro is a member of the cello studio class of Paul Christopher and of the Natchitoches-Northwestern Symphony Orchestra. He has participated in a number of summer music programs including a tour of Paris, France with the Binational French-Colombian Orchestra in 2017 and the Renova Music Festival in Pennsylvannia in 2018. Also, at the beginning of this year Alejandro was part of two orchestras in which he played alongside international artists Alexis Cárdenas (violin), and Santiago Cañón Valencia, (cello) as well as members of the London Philharmonia Orchestra.