The Poetics of Silence: KAFKAMUSIK

Franz Kafka’s oeuvre stands as a stark contrast when the theme of music is employed in his narratives as compared to literary contemporaries such as Hermann Hesse and Thomas Mann whose characters are often performers, composers, or musical enthusiasts who discuss the topic of music frequently. Even when music is occasionally referenced, Kafka’s protagonists on the other hand are at best inept at, ill-informed or completely ignorant of the topic when it comes to music and Kafka’s depiction of musicians is usually negative. This sort of treatment is commonplace in Kafka’s writing, but despite the limited role that music plays in his works the art-form is nevertheless referenced and woven into the fabric of his writing.

However the role of music in works by Kafka ties in directly with reader critic Wolfgang Iser’s theories of ‘literary gaps’ as well as aesthetic theories on music by John Cage as demonstrated in his famous music of silence 4’33”.

The stance taken by Wolfgang Iser in reader-response criticism introduces a decisively new position of prominence that is placed upon the reader and the role he plays in bringing meaning to the literary process. For Iser there must be active and equal participation by the reader for there to be textual meaning. According to his position the reader is an equal participant in the creation of textual meaning. His contribution as co-creator as it were, is that as he reads, he supplies that portion of the text that is not written but only inferred, implied, or even tangentially referenced. As Iser puts it, during the reading process the imagination of the reader that is called upon to fill in the “blanks” (Leerstelle) of the text, is one of “concretization”. That is, in the reader’s own mind there is a making of textual meaning out of the areas of “indeterminacy” (Unbestimmtheitsstellen) contained between and within the lines of the text.

In his composition 4’33” John Cage challenged the entire history of Western music that preceded him by calling into question the very definition of what music was, or more accurately put, what it could be. The score for solo piano requires that the performer to sit at the instrument for 4 minutes and 33 seconds with the lid closed and no other sounds are to be made. At three equidistant points during the work the pianist is to quietly raise and re-close the piano lid, thereby giving a tripartite formal design to the piece. Cage’s concept was that the audience should listen to whatever sounds might occur during this time frame. The formal structure of the piece is therefore to give a temporal frame to silence, which in reality doesn’t exist as an absolute concept. In his collection of writings on music, Silence, Cage discusses the commonality of such a radical approach to composition with music from the past. In the section entitled The Future of Music: Credo he writes: “If this word ‘music’ is sacred and reserved for eighteenth- and nineteenth-century instruments, we can substitute a more meaningful term: organization of sound.”

Iser’s critical literary position and John Cage’s theories piece both echo the role that music plays in Kafka’s writings. Although music is never a central theme, it does nevertheless appear “silently” at times as a metaphysical force behind the superficial narrative layer of text. Just as there is not such thing as absolute silence in music, there is also no absolute silence in the works of Franz Kafka when it comes to the topic of music.

The Poetics of Silence: KAFKAMUSIK is a realization of the connection between literary gaps, theoretical silence, and music as an incorporeal, supernatural force in the works of Franz Kafka. As music, KAFKAMUSIK attempts to entwine the commonalities of textual, musical, and topical silence in Iser’s theories, Cage’s music, and Kafka’s texts. Mark Lee

Gently Weep was commissioned in 2005 by Kristine Coreil, who was looking for a new work for the natural horn, the valveless horn that Mozart, Haydn and Beethoven used in their works with horn. The piece utilizes a constant echo effect by using a digital audio delay device. In 2009 a version for cello was prepared for Paul Christopher, which is essentially the same work, but transcribed to suit the characteristics of the cello. While the work is slightly melancholy in mood, it is not intended to portray sorrow or weeping, per se, rather the title is derived from a brief, almost hidden quote of the song "While My Guitar Gently Weeps" by George Harrison. Thomas Hundemer 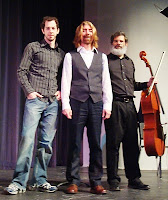 Southeastern Composer's League
Concert No. 2 at 8:00 am and
Concert No. 3 at 9:30 am
Louisiana Tech University
Ruston, Louisiana

Ballade for the Hellenic Land for Solo Cello (1996) .... Dinos Constantinides 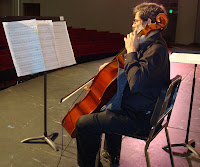 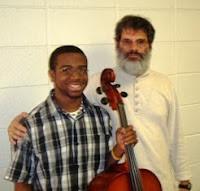 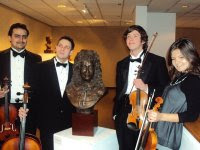 *A special thank you to Helen and Beecher Wood for use of their sound equipment.
Email ThisBlogThis!Share to TwitterShare to FacebookShare to Pinterest