9:00-9:25 am in room 211
Paper by Jackson Harmeyer (University of Louisville)
Intersections of Timbre, Harmony, and Melody in the Liminal Compositions of Kaija Saariaho for Flute and Cello 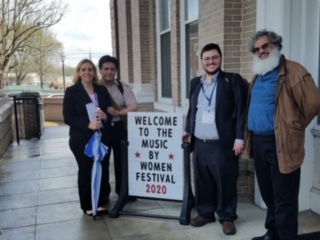 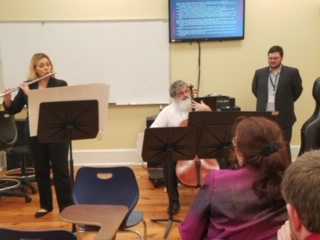 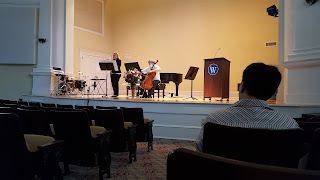 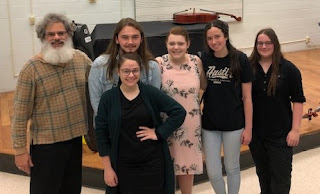 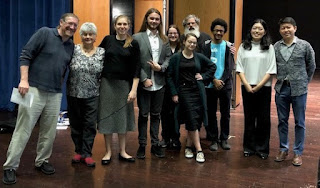 You’ll be transported to 1920’s Paris by these jazz and Brazilian-inspired scores by Milhaud, including The Creation of the World,uniquely brought to life by Grambling’s Orchesis Dance Company. Then, we’ll celebrate the 250th anniversary of Beethoven’s birth with his lively Symphony No. 7, appropriately dubbed The Apotheosis of the Dance. 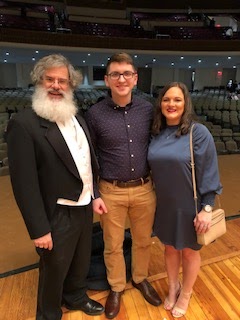 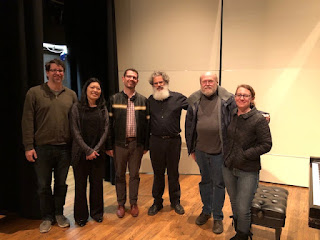 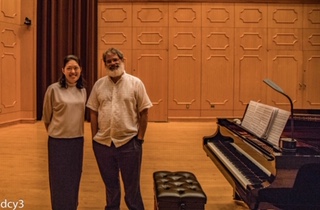 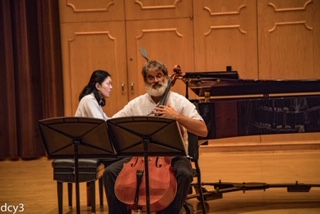 
No comments:
Email ThisBlogThis!Share to TwitterShare to FacebookShare to Pinterest 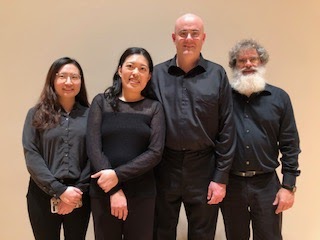 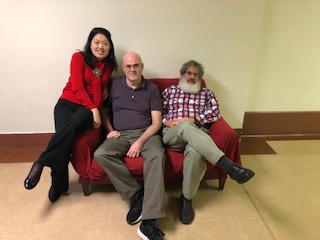 Tonight NSU Associate Professor of Cello, Paul Christopher,
plays three contrasting works written for cello since the turn
of the twentieth century. The first is by Natchitoches-based
pianist and composer Michael Young, who also serves as
Mr. Christopher’s musical partner tonight. Young has
written the following about his new piece, Nocturne for
cello and piano, which he and Mr. Christopher premiered at
the Sugarmill Music Festival in May 2019: “My Nocturne for
cello and piano is a lyrical piece in ternary form. After a brief introduction in the piano, the cello presents the principal theme, a nostalgic melody tinged with poignant
chromaticism. The piano soon abandons its accompaniment
role as the two instruments engage in a dialogue centered
around five motives that form the basis for the rest of the
piece. In the middle section, two features in the treble
broken chord figuration in the piano—one rhythmic and one
harmonic—contribute to the section’s rise and fall in
tension. The figuration progresses from six to eight
subdivisions of the beat and then slows to quintuplets.
Meanwhile, the figuration creates a harmonic arch from
seventh to thirteenth chords and then back to triads.
Throughout the middle section, the two instruments
continue their lively dialogue around the five motives, now
supplemented by their inversions. One of these motives
generates the chromatic key scheme of the middle section
(B major, C minor, A Lydian, B-flat minor, G major, and G-
sharp minor), which is supported by a series of bass pedal
points that outline the six notes of the whole tone scale. In
the final section, the principal theme dissolves into pensive
solos for the cello and then the piano. After a final
impassioned dialogue the music fades to a delicate end.”

The next piece we hear is Cello Song Variations (“Hallelujah,
I’m a Bum”) by American experimental composer, Christian
Wolff (born 1934). This work for solo cello, composed in
1978, reflects Wolff’s interests in political subjects and
protest songs which, in the 1970s, became significant
factors in his music. Previously, Wolff had, like his mentor
John Cage, kept his music “free of propaganda” and
concerned only with musical matters, although his works of
the 1960s already demonstrated a certain social
consciousness in the way they allowed performers to
contribute to decision-making processes. As of the 1970s,
however, Wolff’s social consciousness had aligned with the
new political awareness in folk music, jazz, and other
popular idioms as well as that of fellow experimental
composers, like his colleagues Cornelius Cardew and
Frederic Rzewski. These composers were particularly
concerned with workers’ rights, and Wolff, in a 1980 article
entitled, “On Political Texts and New Music,” comments on
their allegiance to democratic socialism. Yet, here, Wolff
also admits two problems that experimental composers face
when they assert political stances. These are extreme
individualism and esotericism, both of which can prevent
the music from communicating to the same mass audience
for whom it claims to advocate. These are issues which
ultimately drove Cardew to renounce his earlier
experimental music, although Wolff seems to have been
satisfied with a compromise of sorts.

Works by Wolff creatively integrate folk, work, and protest
songs into their musical fabric without abandoning the
experimental language. Often, as in Cello Song Variations,
the original song is heard straightforwardly before these
materials are, in the industrial terms used by Michael Hicks
and Christian Asplund in their biography of Wolff, melted-
down and recast. In other pieces where the songs are not
presented openly in this fashion, Wolff simply instructs his
players to perform the song itself prior to the new work. The
song, “Hallelujah, I’m a Bum,” appears in Songs of Work and
Protest by Edith Fowke and Joe Glazer, a popular 1973 Dover
reissue of a 1960 anthology of folk music, as well as in Carl
Sandburg’s 1927 collection, The American Songbag.
“Hallelujah, I’m a Bum” is attributed to Harry McClintock, a
singer-songwriter associated with the labor union, the
Industrial Workers of the World whose members are known
as the Wobblies. McClintock claimed that he added the
irreverent text, which describes the beggar’s life asking for
handouts, to a Presbyterian hymn when he himself was a
hobo in the late 1890s; soon, it was so popular, it was
assumed to be an anonymous folksong and McClintock had
to sue for his authorship. In Wolff’s Variations, the cello
plays the presumably familiar melody stringently before
initiating variations which effectively deform the tune.

Throughout the piece’s more than ten-minute span,
fragments of the original can be heard and they become the
basis for Wolff’s disjoint variations. Eventually, the
independent parts build to an emotional intensity, although
the tune itself never truly returns.

Sir Arnold Bax (1883-1953) has been called the most Celtic
of British composers. Although born in London, Bax found
his inspiration in the landscape, folklore, and literature of
Ireland and the elements of Celtic culture that still endured
on that neighboring island. It was through the poetry of his
Irish contemporary William Butler Yeats that Bax first
discovered Ireland and the wider Celtic tradition. Then,
while living in Dublin from 1911 to 1914, he adopted the
pseudonym Dermot O’Byrne, as if an Irishman, and began
publishing poetry, short stories, and plays. Although, in the
end, Bax made his career as a composer, his music shares
much in common with poetry: as one commentator has
remarked, “It is the musical equivalent of the lyrical impulse
in poetry, the attribute which causes utterance to take
spontaneously beautiful forms, irrespective of all else.” And,
while many other composers in the early twentieth century
were intent on breaking with the Romantic past, Bax was
content for his music to remain lush in its orchestrations and
driven in its harmonies. At the height of his popularity in the
1920s, he was briefly regarded as Britain’s leading
symphonist; indeed, he completed seven symphonies,
fourteen tone poems, and numerous other orchestral works
throughout his career. He composed fewer and less-
demanding works in his later years, wishing to “retire, like a
grocer” as he put it. Despite his knighthood in 1937 and
appointment as Master of the King’s Music in 1942, his
compositions fell into general neglect after his death, and
only recently have they seen a renewal of interest from
listeners, performers, and scholars alike.

The Cello Sonata in E-flat major, which concludes our
program tonight, was completed on November 7, 1923 and
premiered on February 26 of the following year by cellist
Beatrice Harrison and pianist Harriet Cohen. Harrison was a
revered cellist who was the soloist in the first festival
performances and recordings of Elgar’s Cello Concerto.
Cohen, meanwhile, was a formidable pianist and also Bax’s
lover, for whom he had abandoned his wife and children;
Cohen remained a steadfast advocate of Bax’s music
throughout her career and he would continue to write for
her, even after he became romantically involved with
another younger woman. The Sonata is in three movements,
the first marked, Moderato. It applies a rough sonata form,
complete with exposition, development, and recapitulation,
but with many contrasts between individual and often
conflicting materials. The opening is fearsome and troubled,
while the second subject has the delicacy of a nocturne;
later, the recapitulation begins, unexpectedly, as a slow
lament. The second movement, Poco lento, borrows from a
tone poem, Spring Fire, which Bax had written ten years
earlier but would not be performed until 1970. Bax
described the music of its opening section, reused here, as
suggestive of “the uncertain and pensive hour immediately
before daybreak in the woodland. It has been raining. The
branches drip softly, and a damp, delicate fragrance rises
from the earth.” The gentle passagework heard in the piano
evokes rainfall while the elegiac melody introduced by the
cello sets the mood and hour. The third movement, Molto
vivace ma non troppo, begins in a lively, folkdance fashion
unlike either the conflicted first movement or tranquil
second. After much excitement, the Sonata closes with a
reflective epilogue which incorporates familiar material, a
narrative device which Bax often employed. 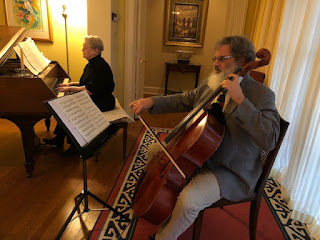 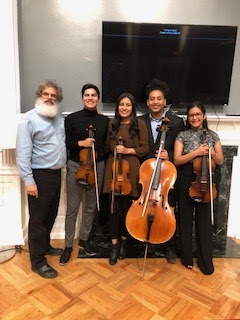 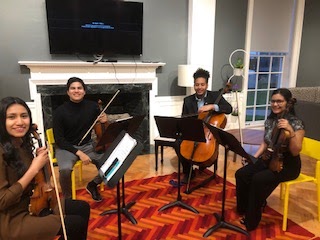 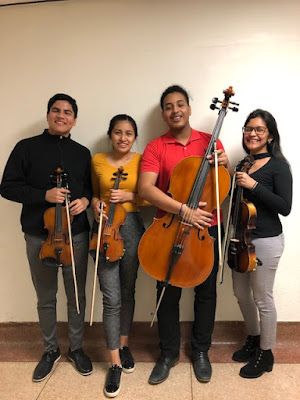 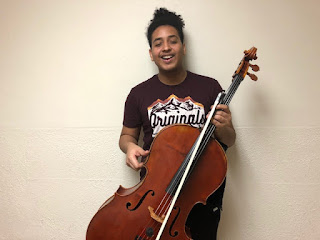